You are here:
Home / News / Thank you for the music

Thank you for the music

Sounds of the 70s spill from the recreation hall as residents and staff clap and tap and sing along.

It’s December 2020 and the annual Christmas concert at Calvary St Joseph’s Retirement Community in Newcastle is in full swing.

But it isn’t professional entertainers out front belting out the tunes. Covid restrictions mean they can’t come. Instead, resident musicians Glenn and Karl, themselves in their 70s, have stepped in to fill the void, just as they have throughout the long, challenging year. They’ve picked up a guitar, set up a line of conga drums, and have stepped up to the microphone to entertain and lift the spirits of their friends and neighbours.

At the end, a woman stands to express thanks on behalf of the residents, not just for that show but for all of them throughout that first pandemic year. “And you took me back to my university days, thank you for that,” says the beaming woman, a school principal in younger days.

The ‘boy band of St Joey’s, is still doing it, although in the current lockdown and in an abundance of caution they are rehearsing rather than playing to an audience.

For Glenn, its decades away from ‘Pages of Time’, a band he and a few high school friends started back in the day, rehearsing at a mate’s house and playing teenage gigs at a local hall.

After a few years, studies and careers beckoned and the mates drifted away. Glen became an apprentice electrician at the local BHP steelworks and then a power station sparky before striking out in other directions and other states, including a stint in Darwin where he helped to restore power in the aftermath of Cyclone Tracy. Later, he went to university to do electrical engineering, married and raised a family.

For former computer engineer Karl Kach, it is even further away from his California dreaming days, living in San Fransicso and jamming with the likes of Carlos Santana, John Lee Hooker, David Lee Roth and Joan Jett, all friends of friends that he considers himself lucky to have known and even luckier to have played with, if only during studio rehearsals and parties.

“All the guys I knew then were consummate musicians so if I wanted to play with them I had to really lift my game,” says Karl who started playing bongos when he was seven after watching Dezi Arnez and son Little Ricky performing on television.

He learned “normal drums”, playing jazz numbers with brushes until he got bored by age 12 and stopped. “Then the Beatles came out and I fell in love (with music) all over again.”

Never a fully professional musician, he played solo in nightclubs and dance parties in between his day jobs, and played on the soundtrack of a 90s remake of the zombie cult classic film The Night of The Living Dead where all the music was electronic except the sax and Karl on drums.

“I was an engineer – I built computers. They were nearly as big as a house in those days,” says Karl.

He built computers all over the world before his company transferred him to Sydney in 1986 for “a two-year contract that never ended”. He eventually moved to Port Stephens to be near his daughter before the impacts of a fall saw him living at Calvary St Joseph’s.

Karl brought his bongos and congas with him and first came across Glenn when a staff member mentioned another resident who was interested in music and played guitar. Karl wandered the corridors until he found Glenn.

Although Karl’s musical tastes are “a bit harder” and stretch to Latin and punk and even metal, he’s happy to let Glenn be the frontman and take the lead in choosing the tunes.

“Glenn’s very good with 60s and 70s songs and I do the back beats – it’s worked out pretty well,” says Karl with his trademark soft smile.

“We picked 60s and 70s rock because it’s warm and familiar and you don’t have to explain anything. Many of the residents were young adults back then.”

Comfort music for a generation.

“It’s their vintage,” agrees Glenn. “They can relate to the music – they were young people then.”

Glenn adds a healthy dose of protest songs that clearly resonate with the rebel in his soul. Not that it’s all about protest – he’s known to get all choked up singing Amazing Grace, “a beautiful song”.

In between lockdowns, the dynamic duo took themselves busking for a lark.

Manager at Calvary St Joseph’s Retirement Community, Helen Gayner, says it was as much the practice and jam sessions that residents loved.

“Those can wander to the hall and just listen to the guys,” said Helen, who once became a backup singer in the band – until she realised a cheeky Glenn had turned off the volume on her microphone.

“It helped morale, but also for staff. They would go past and hear them playing and you’d see staff in there singing or dancing. It made the home feel like a happy place, the music echoed through the home.”

For Glenn and Karl it’s about the music, about playing again, having fun and having a purpose. It’s about the memories and the joy they make.

Karl recalls a resident with advanced dementia pounding on his leg and clapping along.

“If we get people clapping, or they can get up and dance and, sing – that’s where I get my joy from.

“I do it because these people are my family and I enjoy that part of it.” 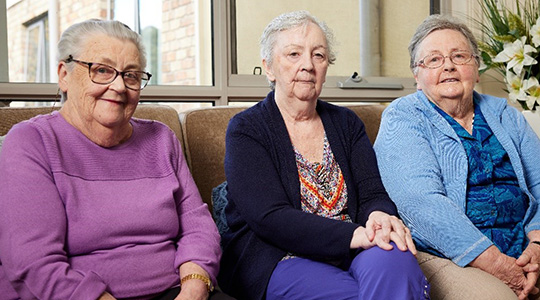