The project was a resounding success, the staff are delighted and proud to wear the new t-shirts and after further consultation with Tiwi Land Council and engagement with Xavier Catholic College, the students are painting the doors at  Mulakunya facility with Aboriginal artwork and we are seeking to incorporate wood work maintenance as part of their education courses, as well as arranging an annual Calvary scholarship for the school to promote local artists.

About the t-shirt design

Front of the shirt:
The crocodile (Yirrikipayi) is one of our Tiwi totems and people who have that totem dance crocodile. Crocodile is the totem for the Orsto, Portaminni, Kerinaiua, Poantumilui, Ullungura and Mangutopi families.
The stingray (Kuluwarringa) is not a totem but is an important food source for Tiwi people and is commonly eaten. We catch it using a spear and it is a traditional food which keeps us healthy and strong.
The spear (Numwariyaka) is a male symbol, it is traditionally used for hunting and for ceremonies. It is about keeping strong and in the old days men fought with spears.
Traditionally, blue isn’t a Tiwi colour and we only used ochre colours but now people are using blue and green more to represent the sea and the land.

Back of the shirt:
Kurlama is a ceremony that men participate in and it’s about the lifecycle, new beginnings of life, seasons, hunting, weather, plants and water and anything you can see around you. It is about being thankful. People sing about fighting that happened in the past and the celebration of life, the new journey of life after death and beginning of the afterlife.  Kurlama also celebrates new babies, deaths and deceased persons. During Kurlama people also sing about giving their sons and daughters Tiwi traditional names. The ceremony is happening in the centre and the people are around it. There are four tribes represented in the yellow and there are cousins and cousin brothers who are related singing in Kurlama.

Further activities being undertaken in the Northern Territory include: 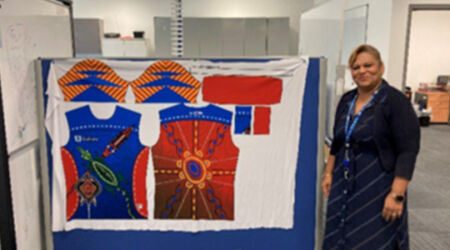