You are here:
Home / News / The Christmas Bus Lady

Through tragic circumstances, Margaret found herself a widow at the age of 23, just before Christmas, complete with two children under the age of three. It was this bleak time in her life, combined with her kind and caring nature that has motivated her to spread happiness where she can.

It started with just a roll of tinsel on a bus’s dashboard and a cassette of carols playing. Nineteen years later and the infamous Christmas Bus is now a firm and much-loved part of the Christmas season for Novocastrians.

For the uninitiated, the outside of the Christmas Bus can be seen twinkling its way on the roads decorated in tinsel, stickers, and festive artwork, complete with fairy lights on the wheel hubs. However, it is when you step onto the bus that you are transported into a magical world of Christmas. Almost every centimetre of the interior is covered in tinsel, ornaments and posters.

“It doesn’t matter how old you are, everyone is five when they step on board,” says Margaret. It truly is a jaw-dropping sight! Margaret has lovingly sewn every one of the bus’s special festive seat covers and curtains, together with creating items of clothing for the driver’s fancy dress box. Santa, the Grinch, Elves and Mrs Claus are but a few of the characters that can be seen proudly driving the Newcastle Bus throughout the festive season. Even the most hardened drivers fall to the charm and allure of being rostered a shift on this magical bus. It is not uncommon to see Margaret applying lastminute touches to the drivers, or as she calls them ‘Santa’s little helpers’, including transforming brown beards to white with the help of $30 worth of white hair spray.

Included in the driver line-up is Margaret’s daughter Amy, who has followed the family tradition. Margaret’s Dad was a bus driver; her brother and sister drive buses, as well as her youngest daughter. Margaret is also a qualified driving instructor, a career that her 81-year-old mother, Dot Ryan, took as a career path and continues to impart her wisdom to Novocastrian L Platers to this day.

For twenty years Margaret has been using her own money to purchase decorations for the bus, something she clearly takes great pride in, and every year without fail there is a new addition.

Her mother also contributes to the cause by hand painting sleigh and reindeer and nativity scenes on recycled Holland blinds for the outside of the bus, and it is not uncommon to see Dot taking to a sheet of ply with a jigsaw to whip-up a new Christmas cut-out for her front lawn.

Christmas Bus preparations begin in November, with Margaret’s “special baby”, a Volvo # 2078 ST bus to be precise, getting serviced and washed ready for the busy season. Next come driver rosters and routes, followed by the electricians stepping on board to wire up the Christmas lights and stereo ready for the onslaught of non-stop Christmas songs.

The weekend before the bus takes to the road, Margaret and her merry band of helpers can be seen dusting off approximately 30 boxes jam-packed with decorations and going about their work.

The labour-intensive process of decorating the bus takes approximately 18 hours. From 9am to 6pm on both the Saturday and Sunday, a steady stream of Newcastle Bus employees can be seen on site. To put the mammoth task into context, over 3,000 cable ties are used to secure everything from the tinsel to the seat covers, and 20 metres of double-sided tape is used to hold decorations on the exterior of the bus. However, without fail, come the first Monday of December the bus will be out on the roads spreading Christmas joy.

“I’m very grateful for the support I receive from management and colleagues at State Transit Newcastle. They truly support this initiative and see it as very much a part of the organisation.”

Margaret also creates a special DVD showcasing Christmas Bus photos from the previous year. The DVD is played on the bus and is sold to raise funds for Calvary Mater Newcastle. Margaret says,

“It’s really heartwarming to see the school kids placing coins in the donation box. It’s nice to see that side of humans. Christmas kindness is definitely alive and well in Newcastle.”

The community is always very much in the forefront of Margaret’s mind. Every year she purchases over 30 kilos of lollies and 1,000 candy canes to give to passengers free of charge. She has also been known to provide the perfect wedding backdrop for excited newlyweds who are eager to opportunistically have a wedding photo taken on board the bus.

Margaret’s close links formed with the Mater when her second partner (the father of her third child) passed away in the hospital from a brain tumour, over six years ago.

“The Mater was always so good to him; he was sick for a long time and they were excellent. I just wanted to give a little bit back.”

Giving back to the community is something Margaret does in spades! Nothing is too much trouble and she goes out of her way to spread happiness. If it’s not the Christmas Bus, Margaret can be seen organising bus trips to BreastScreen for her female colleagues to have mammograms. The bus is of course decorated suitably in pink, with pink cupcakes at the ready.

Come Boxing Day, the mammoth task of the pull-down of Christmas Bus decorations commences. “If I’m working that day, I’ll start taking the decorations down gradually, as it takes just as long to take them down, as to put them up. Even when the bus is in use and a few layers of the decorations have been packed away on a break, passengers still comment on how great the bus looks. It makes me smile, as I can’t help but think you should have seen the bus from the start,” says Margaret.

Margaret delights in telling stories of her colleagues’ involvement in the Christmas Bus and how it has the touched the lives of many in its own special way. “I love watching people’s faces light up when they step on board the bus. I never tire of seeing their reaction.”

With a cult following, a half-hour documentary that aired in 2005, and numerous newspaper articles, it’s easy to see how the Christmas Bus has inspired other bus companies, including Sydney, to start their own festive traditions.

“I like to leave a tiny piece of tinsel up in the bus strategically placed so no one else can see it but I know it’s there. Every time I get on the bus I get excited about the thought of the next Christmas Bus.”

How you can help

All donations over $2.00 are tax deductible.

Further information about the Christmas Bus and timetable information: 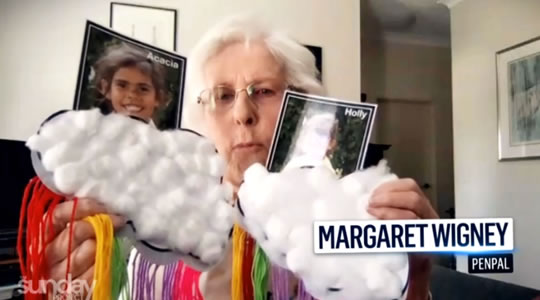